A Tatar From The Lord Of Samarcand by Frank Frazetta 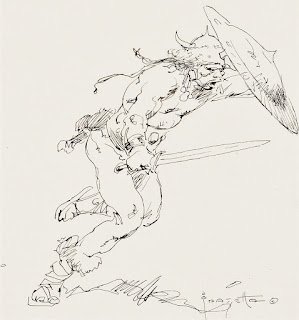 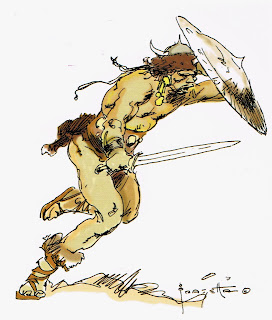 Great story by Robert E. Howard, with the role of Conan played by a Scotsman named Donald.  That was a tough name for me to handle, but I really struggled with The Tatars that Donald rode with and/or against.  In the south, when Cap'n was a wee ensign, Tater was a term of affection.  Turns out REH was spot on in that the Tatars were incorporated into the Mongolian Empire when Genghis Kahn unified the various steppe tribes.  This particular warrior eventually had the honor of having Fritz apply water colors, which we've already discussed, but I love the idea that after a hard day of art "work,"  Frazetta would unwind by treating all of us to a water color or two
Posted by Cap'n's Comics at 10:31 PM