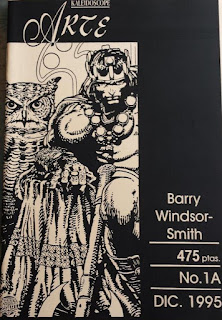 So, in the way back, I said this great Conan panel appeared in Orpheus #1, a British fanzine, but no one seemed to know what Conan comic it was intended for.  I still speculate Conan #10.  Orpheus dinnae say anything about the image, it just accompanied an article on Robert E. Howard, so I thought I might learn something more from this Kaleidoscope 1a magazine from 1995, as I found out today it also contained the same panel.  When I looked at the blurb next to it in Kaleidoscope, however, it just says 1971 Orpheus (Fanzine)....sheesh
Posted by Cap'n's Comics at 9:58 PM